Arizona State’s basketball team walked off the court to the thundering cheers of their fans Saturday night in a 78-60 victory over Cal. The last home game wasn’t anything glorious like the court-storming three-point double overtime victory over Arizona three weeks prior, and it wasn’t an impressive display of prowess from playmaker Jahii Carson like his 26-point game against Stanford on Wednesday (he scored nine points against the Bears). Nonetheless, the crowd gave the Sun Devils a sendoff that none of the six seniors playing their last game in Wells Fargo Arena will soon forget.

Saturday’s game was also the last that Carson will play in WFA. Coach Herb Sendek confirmed that the sophomore star will not be returning for the 2014-2015 season and it’s expected that he will enter the NBA draft in June.

Although Carson didn’t put up big numbers on Saturday, his impact on the Sun Devil team over the past two seasons is irrefutable. His mindset for the Cal game, however, was always about the seniors. It was their night, after all.

Between Jermaine Marshall’s 22 points and Shaquille McKissic’s pair of thriller dunks, you could say that the seniors had their night. Marshall, who spent up to his junior year of his college career as a playmaker over at Penn State, has been a top scorer and key player in his first and only year at Arizona State. McKissic’s dunk, airing on the jumbotron at the end of regulation as the play of the game, put the crowd on its feet and filled the arena with thunderous roars.

Jordan Bachynski received the loudest of cheers, however. The 7’2” senior has been an icon for the Sun Devils this season. His numbers against Cal were average overall (seven rebounds and four blocks), but it didn’t stop the remainder of the student section from giving “Block-chynski” a standing ovation as he walked through a nearly-empty Wells Fargo Arena. Earlier, he’d followed his teammates off the court with tears in his eyes, turning around and walking backwards slowly through the tunnel to take one last meaningful look at the court he’s called home since 2010. His mother thanked the members of the 942 Crew, calling it “by far” the best student section she’d seen in years of attending both her sons’ basketball games (Jordan’s brother Dallin plays for Utah).

Although the seniors were recognized both at the end and the beginning of the game, and walked out to a “Thank you seniors!” chant led by the 942 Crew, they know their season isn’t over yet. The Sun Devils head up to Oregon to take on the Ducks this Tuesday at 11PM ET. 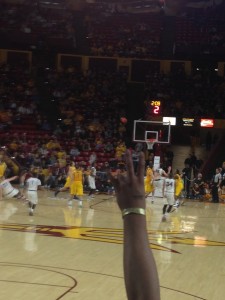 Bailee Wishart is a sophomore majoring in journalism at Arizona State University. An avid Sun Devil fan, she can typically be found in the center of the student section during most football, basketball, and volleyball games. Bailee was raised a Green Bay Packers fan and has been following the team from Title Town since she first began to understand the game of football. She regularly keeps up with her favorite sports- football, soccer, basketball, track and field, and gymnastics- year round. In her spare time she is heavily involved in the WOW Factor! club at Arizona State, playing guitar, or writing songs. You can follow Bailee on Twitter @BaileeWish