In Memoriam: The Dbacks 2013 Season 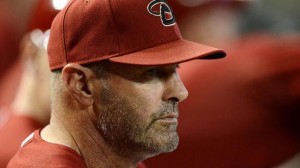 Ladies and gentlemen, we gather here today to mourn the loss of The Arizona Diamondbacks 2013 season. I know we have great sadness in our hearts. Much like the loss of a loved one, it’s hard to admit it’s over for your beloved Dbacks. But with 17 games left to play coming into Friday night’s game, Arizona is currently 12.5 games behind the Dodgers for the NL West and 9 games behind Cincinnati for the last NL Wild Card spot. Even though they’re not statistically eliminated, it was time to pull the plug and make the call.

So where did a season that started off so right go so wrong. Many people have pointed to GM Kevin Towers’ inability to make a big move before the trade deadline. Members of the media speculated on the reasons why Towers wasn’t ready to pull the trigger on a big deal. Rumors swirled around the Dbacks trading for many big names, such as starting pitcher Jake Peavy or John Axford for bullpen help. At this point in the season, the Diamondbacks had already lost their hold on 1st place in the NL west to a surging LA team that is seemingly unstoppable. But as the team continued to tailspin and lose their grip on 1st place, why not make a move at that point? Because I believe Kevin Towers knew then what we know now.

It was already over.

By the time the talk of trading for pitching help came up, it was already too late for this team and the cost for these names were too high. Arizona has done an excellent job at acquiring top tier young prospects that make other teams that threw in the towel by the All Star break drool. They were more than willing to part with high priced superstars to the Diamondbacks but, in return, they wanted to dip into Kevin Towers’ honey pot. And when the outlook still appears to show you missing the playoffs even with trades being made, what’s the point?

No general manager in sports can ever really say “Well, it’s a wrap for us!” But if the team truly needed to make a move in order to contend, parting with young talent is a must. Every team has done it and will continue to do it. Looking at it from a management stand point, you had to completely believe that the moves you were making would not only better your team but must assure that it will help your team to succeed at making the playoffs. We have seen Towers make these moves in the past, so it sends up a red flag in regards to his faith that these changes would have altered the course for the team. And ultimately, their lack of making moves wasn’t what killed their season since it was already over for them.

If it wasn’t the lacks of trades, this begs the question then “When DID the kill shot happen on the Dbacks season?” In this fuzzy guy’s opinion, I believe it was The Royal Rumble with the Dodgers. A fight like that can do one of two things. It can either motivate or deflate a team. For the Dodgers, it gave them something to rally around. Like them or hate them, they bonded as a team and became stronger after that incident. For the Diamondbacks, it seemed to be the beginning of mediocre baseball. Arizona is 37-42 since that infanous series with LA, but the bigger issue is their series wins. The Diamondbacks have only won 9 of their last 27 series vs opponents, but they have lost or split 18 of those 27. Many things have contributed to these loses, not just one scrap with a rival. But when you add into the mix constant injuries, inconstant pitching from the bullpen, and a NL West opponent with seemingly bottomless pockets, the writing was on the wall for management long before we as fans even saw it coming. For possible proof,  look no further than the words of manager  Kirk Gibson prior to the All Star Break, when the team was still in 1st place: “The problem is when you have such high expectations for yourself, you can get disappointed, and we can’t do that.”

Say what you will. Maybe if heaven and Earth moves, the Diamondbacks can still make the playoffs and prove me and my theories completely wrong. I would love to be wrong, but if I was in KT’s shoes, I  would have never mortgaged my team’s future on it either. Sometimes you just have to say “We’ll get ’em next year”.

Derek Montilla is a freelance writer from Phoenix, AZ.  He is currently the co-host of The Kave Show Sports Talk on 1100 AM KFNX locally as well as a web writer covering the Cardinals and the Diamondbacks. He has been published in Arizona for the past 9 years, writing regularly for printed publications such as Playtime Magazine and AZ Skin Magazine. Derek has also worked with several film and television projects which included collaborating with producers to create an original animated series called “Dystopia” that was made into a pilot. In 2011, he and his wife Jennifer welcomed their daughter Lilly into their lives, which Derek credits with changing his focus to writing children’s stories.  He is currently working on a three book project aimed at young readers ages 3-5, as well as a new multi book series aimed at tween readers and older.  If you have any questions for Derek or wish to contact him, please send him an email at dmontilla@TheSportsKave.com.