In an attempt to change the odds in the NHL Draft, the National Hockey League has introduced a new Draft Lottery format. Changes will take place over a two-year period, beginning in 2015.

“The odds of winning the first overall selection in the NHL Draft for the 14 non-Playoff teams will be adjusted to more appropriately reflect the current state of competitive balance in the League. This will result in a more evenly-balanced allocation of odds, with the 10 highest-finishing non-Playoff qualifying teams receiving higher (better) Draft Lottery odds than they received previously and the four lowest-finishing teams receiving lower (worse) odds.”

The 14 teams that miss the playoffs now face different odds (via NHL.com): 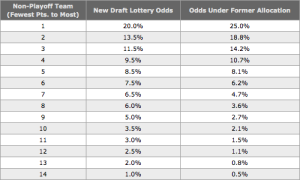 The changes being enforced significantly increase the chances for teams in the middle of the rankings, and the team in 30th place loses 5 percent in odds.

Up until now, the Draft Lottery would decide the first overall selection winner, but in 2016 it will determine the top three spots. Previously, the lowest scoring team was guaranteed no worse than the second overall pick, but the new format means potentially receiving the third or fourth pick.

NHL.com explained how the Draft works in 2016:

The remaining 11 spots will be determined by the amount of regular-season points. The order will start with the lowest scoring team and work its way to highest scoring.

Megan is a sophomore attending the Walter Cronkite School of Journalism and Mass Communication at Arizona State University. She was raised in Southern California and grew up and avid sports fan. In her spare time you will find her at the beach or watching Netflix. You can follow Megan on Twitter @MeganPlain